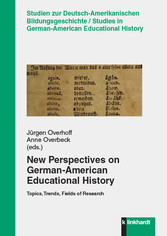 
The history of education has always been an international enterprise. Within that field, the analysis of the remarkable influences of the educational systems of Germany and the United States of America on one another have played a particularly prominent role and have shaped the modern and distinctively Western understanding of education to a considerable degree.
This volume seeks to sharpen the notion of an entangled and intertwined German-American educational history and aims at identifying new and interesting fields of research.
Starting out in the German-American community of Pennsylvania in the 18th century, this volume traces the history of the German-American encounter in the realm of education through the height of the German migration in the 19th century, the period of admiration for the German university system around the turn of the century to the post-1945 era when the tides turned and the US became a model for German institutions of education.