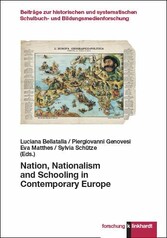 
During the 19th century, up to the middle of the 20th century, the theme of national identity - and even more so of the absolute primacy of the nation - was firmly at the center of the educational projects of European states. Moreover, schools had and have been one of the fundamental instruments in the processes of nation building and, subsequently, in the establishment of nationalist perspectives, being used as a place of transmission of narratives aimed at legitimising the primacy of the nation, whether historically or ethnically based. A significant undermining of the absolute primacy of the nation emerged in the aftermath of the Second World War. A widespread desire to reduce the scope of national sovereignty, to fight against the drifts of nationalism, took on a new consistency. The ideological struggle centered on the two blocs, which characterized the age of the Cold War, contributed to strongly circumscribing the political space of nationalism, but the fall of the Wall has opened up new spaces both for the role of the nation and for the phenomena of micro-nationalism and neo-nationalism. Scholars of different European countries contributed to the reflection on the interrelation of nation(alism) and schooling with a special focus on educational media. This reflection is more urgent than ever and is central to our future and our social, civil, and cultural development.